Games And Origin Of Zorb Ball

Zorb ball has a unique design and it is very durable to use, it can be used in different places like grass, ice, snow, hills (avoid sidewalks). If you stuff it with a donut, the zorb ball becomes airtight and you can use it safely on the water without worrying about getting wet. Sometimes, some enthusiastic water sports enthusiasts also put a little water in the ball - in order to be able to splash the surrounding water for more fun. 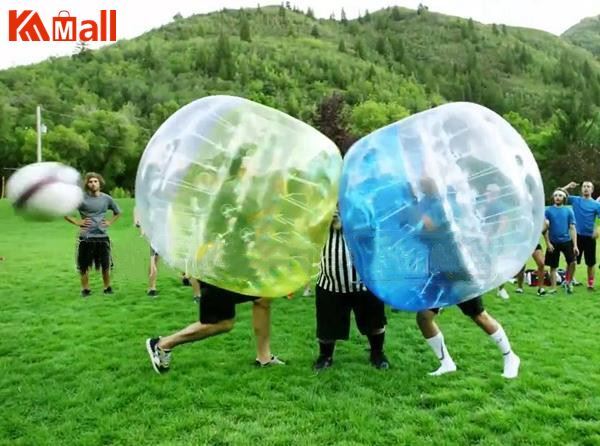 Another very interesting game is zorb ball wrestling. The two participants roll toward each other on the track, and try to knock each other out of the designated area. It's a bit like sumo, but inside an inflatable ball. And zorb soccer is known internationally as "Zorb Football". Players run and roll in an inflatable ball but their feet inside or outside the zorb ball. They run and try to move the football around the pitch.

The history of zorb ball
In 1975, the first human-sized inflated ball was invented by French architect Gilles Ebersolt. Ebersolt, who was just a teenager when he came up with the idea, he created a ball and he called it "Ballule" ("Bubble" in French). The Ballule used inverted vacuum cleaners for pressurization, but in other respects it is basically the same as the today’s zorb ball.

After that, Ebersolt's Ballule was registered with the Conseil de Prud'hommes, and was shown on television internationally in the 1970's and 1980's, but he never made his invention into a commercial products.

Buy a zorb ball for different and do what you like
If you are planning to purchase a zorb ball, scan Kameymall and get ready for everything you like. We provide various zorb balls to meet different customer needs. Hope you will have a nice shopping experience here.

Buy A Zorb Ball For Entertainment