Did you see the picture on the cover? This person is wearing a huge bubble ball that wraps the upper body and head, revealing only the lower legs. This bubble ball is made of PVC, a material that is harmless to the human body and is highly resistant to wear and tear and puncture, making it suitable for use in a variety of games.

Today, I would like to introduce you to a game with simple rules, but very fresh and fun for many occasions. For example, you could have the whole family experience this game at a family gathering on Father's Day. In this article, I will introduce you to the rules of the game "Protect the President" and the role of the bubble zorb ball in the game. 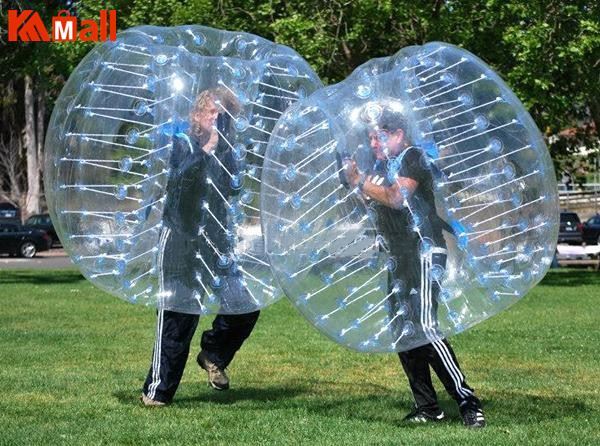 Each participant wears a bubble zorb ball and all participants are divided into two teams. One person from each team is identified as the 'president' and the other team members are the 'agents'. The playing field was divided into two parts, one for each of the two 'countries', and each 'country' would start the game at either end of the field, with the President at the back.

There are two versions of this game, so let's start with version A. Once the game starts, all participants from each team must attack the other president while protecting their own. With both teams attacking each other, the last president standing wins.

In version B of this game, each team has 1 minute to attack or defend only. team A attacks and attacks team B's president. If they knock down the president before the end of the minute they get 1 point, if not, team B gets 1 point. Each team rotates until one team reaches three points!

The role of the zorb ball in the game

To be precise, it is the zorb ball that makes this game so much fun. Firstly, the zorb ball gives people the opportunity to collide directly with each other. The size of the zorb ball makes it more likely that players wearing it will collide. Secondly, the zorb ball keeps the players safe during the collision. Even if players are hit on the ground, they will not be injured.

If you want to experience this game, I think you should come to Kameymall and buy some bubble balls. I believe this game can bring you better memories.

Why Not Try Sending Your Familiy An Air Track Mat?