What Is The Real Essence Of Hill Zorbing?

The real essence of zorbing is a kind of extreme sport, you won’t get the real essence until you play it. Before rolling the hill, you need to enter a large and transparent zorbing ball. Like the movie "Project Eagle" shows, Jackie Chan entered a large and inflatable ball and rolled down the hill and showed us a thrilling experience. If you would like to get such a thrilling zorbing experience, why not pick one online or rent it. 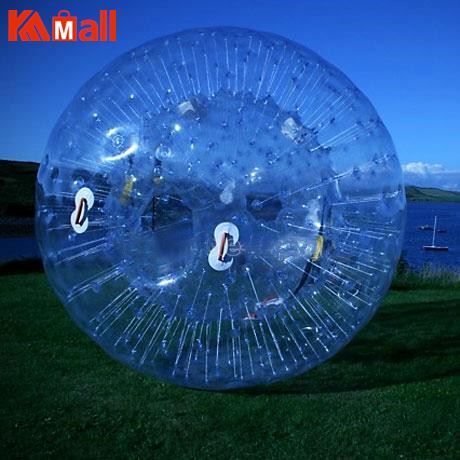 So, what is zorbing?

As it mentioned above, zorbing is a large and transparent sphere with double-layer design. It is made of bouncy and sturdy PVC material, the double-layer structure helps to act as a kind of shock absorption for riders. Thus, it is generally used outdoors.

With such a large, transparent, and inflatable sphere, you can get inside it and use to walk on water, ride down a hill, or play team games with your friends on the grassland. Hill zorbing is just a kind of zorbing games.

It look like a large and transparent bubble from a distance, thus, it also called bubble ball, except that you’re able to see the world around you. Especially if you’re in an area with mostly flat land, some zorbing courses may even build a smaller, rollercoaster-like track for you to ride down and get an exciting experience.

How do you play the zorbing?
Come to the rollercoaster-like track and enter a zorbing, then you can roll down the hill at the very fast pace. During the short period of time of rolling from the hill top to the hillside, with the influence of the centrifugal force, you will not rotate for 360 degree. It is a fact that your adrenaline will rise and can’t helping screaming out.

Purchase a zorbing in Kameymall
Kameymall offers exquisite and durable zorbings, so you can get a nice one at a favorable price here.

Why Not Challenge Yourself With A Rolling Hill Zorbing?

Why Not Introduce The Air Tumble Track To Your Home Workout?