When talking about extreme sports, we cannot miss bungee jumping and zorbing. Most people might only see the zorb ball on YouTube and have not tried zorbing yet. Someone may think that zorbing is too dangerous to give it a try, and others may consider zorbing a fad. No matter what kinds of reasons make you hesitate to try zorbing, I’m quite sure that you will have a much deeper understanding of zorbing and zorb balls.

If there is one thing true in human history, it is that people have always found new and interesting ways to entertain themselves, and the birth of zorbing seems to bear this out. Extreme sports are just one of the different games and fun entertainments invented over the years, the latest being zorbing.

1. A brief history of zorbing

Zorbing involves people getting into a giant plastic zorb ball like a human hamster ball and pushing it forward by running or walking. You might think this is weird, but it is actually fun and has grown in popularity over the past few years.

The first zorb ball in history

Besides the interesting name, zorbing also has an interesting history. The zorbing incidentally began in the 1980s. Taking inspiration from plastic hamster balls that have been around for years, a sport club in England created a plastic ball that could do the same for humans, but the concept was eventually scrapped.

The main reason they failed to make zorbing and the zorbing ball feasible was that the prototype they invented was too dangerous. You could call the prototype of the zorb ball a true crazy thing as they even put a chair inside the zorb ball. Maybe the purposing of putting a chair inside it was to provide a space where the participant could be fixed so that the person inside it could experience the fast rotation when rolling down a hill and make it more exciting.

However, later in New Zealand, Dwane van der Sluis and Andrew Akers later invented a giant plastic ball that humans could stand on, like a human hamster ball, and they decided to call the invention a zorb ball. Zorb balls feature one ball inside the other with a layer of compressed air between them to absorb the impact.

The idea of zorbing is to roll down gentle slopes with a person inside a giant plastic ball and try to maintain balance as the speed increases. But then it was discovered that it was difficult to maintain balance when the zorb ball rolled down. Zorb balls are also water-adapted. If properly sealed, people can walk on water inside the zorb ball. It has become especially popular all over the world.

The improved zorb ball is much safer than the prototype that a sport club created and this can be attributed to the two-layer design. In order to make zorbing a less dangerous and feasible extreme sport, zorb balls for land zorbing usually have a smaller ball and a larger one. The process of zorbing may sound weird to you, but it also sounds fun.

The plastic ball is double layered, so the rider inside the ball can bounce back and get the thrill of rolling downhill at a great speed, but avoid the full impact of hitting the ground repeatedly. Zorbing has been around since the mid-1990s, when David and Andrew Akers came up with this exciting idea in New Zealand. Since then, the business of zorbing has expanded globally, and they have opened offices in seven countries, including the United States. Of course, they spawned a lot of competition, like orbital flights, round the world rides and the more generic rolling hills.

As for whether or not to try it, of course, it varies from person to person. Some people really enjoy the whole process of zorbing, while others might just find it fun for the first few times and start to lose interest after rolling downhill.

Zorbing, on the other hand, is more of a one time experience than your hobby. Or, when inflatable plastic balls float, it could be a new water activity for those who want to experience floating in rapids but are too lazy to paddle.

If you haven’t tried regular zorbing yet or you do not want to take part in an extreme sport like bungee jumping, zorbing and so on, you can still enjoy zorbing, but in some different ways. The main reason why people are fond of zorbing is that there are various sports activities that derived from land zorbing.

Sports fads come and go, but few are as fun as bubble soccer. If you have not seen this quirky game, you can check out some videos on YouTube. Playgrounds are not just for some serious sports. Is there anything more fun than playing soccer in a bubble ball?

You might think zorbing or bubble soccer is a fad or out of fashion, and you may wonder that if it is too late to take part in such a sport, but it is still the newest and most popular sport of the past decade.

Bubble soccer, also known as zorbing soccer or bumper soccer, is a soccer game played on a grassy and flat field where each player wears an inflatable human hamster ball. Zorbing balls can cover the player’s entire upper body and part of their legs, restricting movement and impairing the player’s vision to a certain extent. The sport brings so much fun to players and spectators that many organizers might use the game to distract fans during halftime at a rugby or soccer game.

With a special smaller zorb ball, bubble soccer is one of the suitable sports during the pandemic due to its social distancing measures. Bubble soccer is like a traditional football game, but with a mix of bumper cars and zorbing. 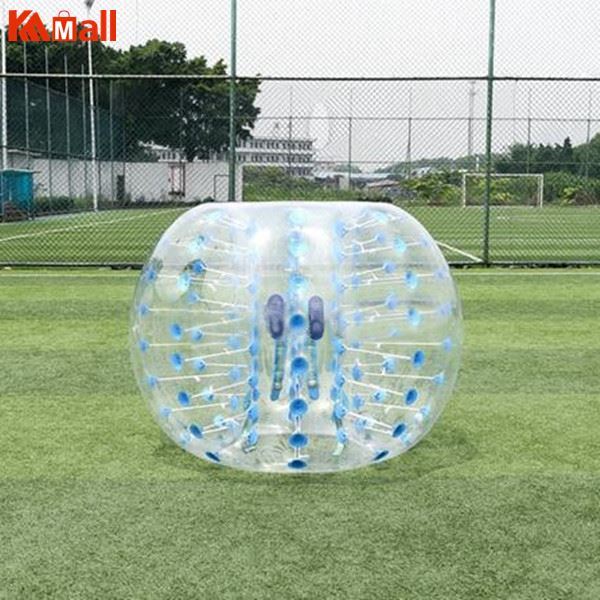 We all know that bubble soccer is a spin off of the extreme sport zorbing, but who was the first to come up with the idea of combining zorb balls and the soccer game? You may not believe that the concept of bubble soccer started as a joke.

In 2011, two hosts of the Norwegian comedy show Golden Goal teased the idea, but then videos of the two playing funny games on the show went viral in Europe. The game then appeared on more TV shows such as The Tonight Show, Good Morning America and Sharks on Shark Tank, and bubble football gained more and more attention around the world.

As mentioned above, you might think of bubble soccer as an unofficial sport, but the International Bubble Football Association (IBFA) was founded in 2014 and hosted the Bubble Football World Cup in England in 2018.

While bubble soccer may not be as maddening as it was a few years ago, it’s still one of the most popular sports in the world. Bubble soccer isn’t an official sport internationally, but that doesn’t mean it’s a fad or that you can’t play it. You can still see people playing zorb football with different rules on different occasions.

Bubble soccer evolved from zorbing, an extreme activity where you climb into a fully enclosed inflatable giant ball for an exciting yet dazzling experience. But as you can see, the bubble ball made for bubble soccer is smaller than it is used in land zorbing.

Compared to the giant bubble ball that contains the whole body, the smaller bubble ball allows the player’s legs to run, jump and kick the ball freely, allowing the player to enjoy the fun of bouncing, rolling, colliding and bumping. Players can’t escape collisions with opponents when trying to score, which you might think is brutal, but bubble balls soften the impact and protect players from injury. To be honest, the joy of bubble soccer mostly comes from bumping into other people.

If you’re not interested in bubble soccer, here the water zorb ball is. A water walking ball, similar with a zorb ball, is an inflatable sphere made of clear plastic that allows you to walk or run on water. 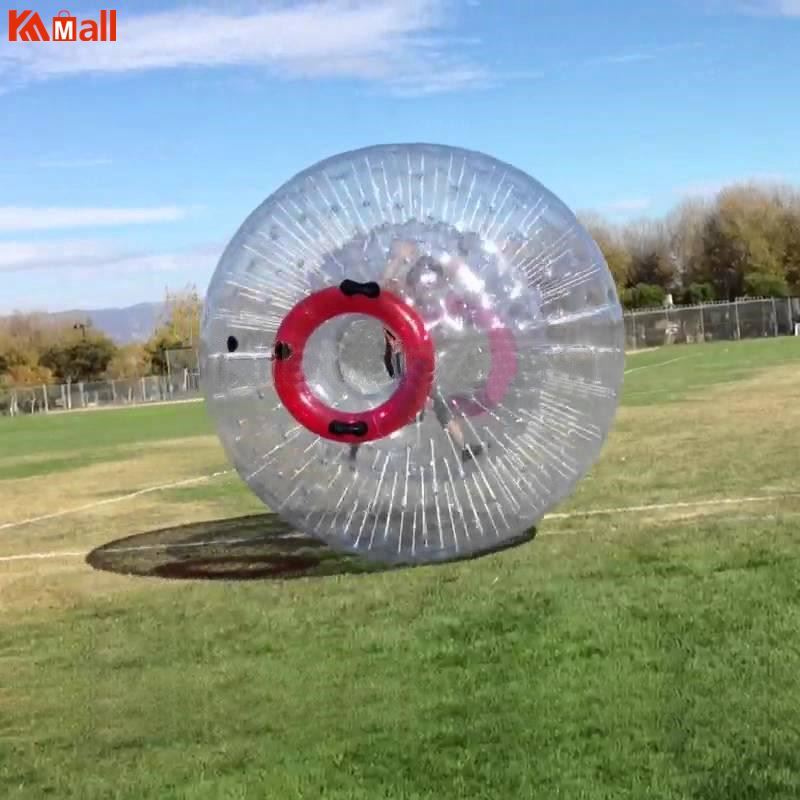 Water walking balls are different from ordinary zorb balls for land zorbing. The water walking ball has only one layer of plastic, and unlike going up and down slopes, this inflatable ball is specially designed for water walking. Getting into a human hamster ball and walking on water is rapidly gaining popularity around the world.

Zorb balls for walking on the water have been featured in music videos and movies since 1971, but now they are finally open to the public. Water walking balls can be found at marinas, lakes, swimming pools, theme parks and even malls. They are fun for children and adults.

While these inflatable balls may be a lot of fun for us, some people may start to worry about the safety of walking on water. Most water walking balls are made of PVC material. And it’s super easy to use these water walking balls. Once the ball is inflated, you can start having fun. However, due to the limited air supply, you cannot stay inside the ball for more than 15 minutes. While water walking can be easily enjoyed by children and adults alike, anyone participating in this activity should be supervised for safety.

In conclusion, it’s never to late to give zorbing a try, and no matter you’re interested in the giant zorb ball for land and water zorbing or smaller one for bubble soccer and other sports activities, I’m quite sure that you’ll love this simple but magical zorb ball. You can now visit Kameymall for more information on zorbing. If you have any questions, feel free to contact us.

Why Do Many People Like To Wear Tank Tops?

Why Should Buy Chinese Grocery From KameyMall-agent?